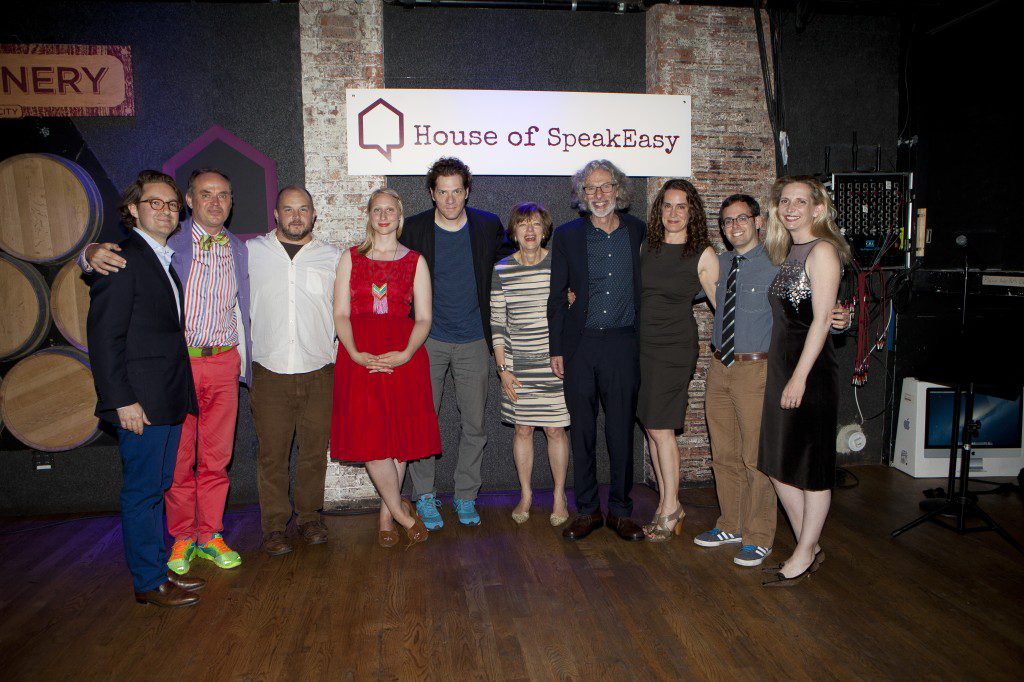 The curtain rose on a raucous final edition of the House of SpeakEasy’s inaugural “Seriously Entertaining” series last Monday at City Winery NYC. There were cartoons and Muppets, breast pumps and seaside sex scenes, moonlight and music and love and romance. Our guests — seven of them; our biggest line-up yet — made us swoon, made us cry, made us laugh, made us beg for one more glass of wine. 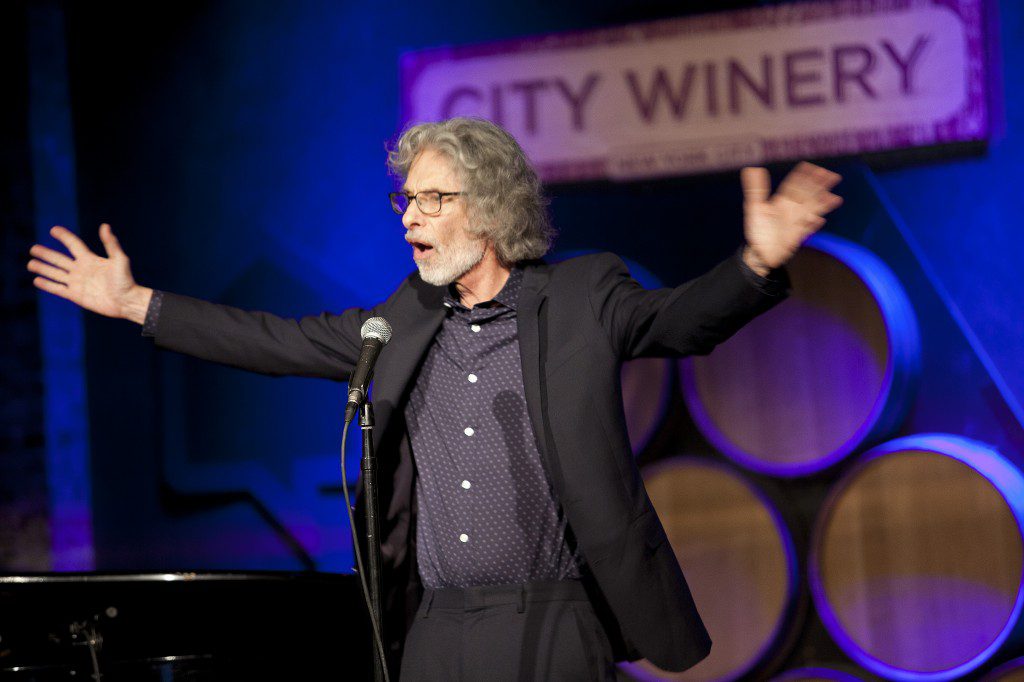 First up to the plate was Bob Mankoff, the New Yorker‘s cartoon editor. “Many people have ideas for cartoons,” he told us. “Doctors, lawyers, accountants… They’ll all picture a desert island with two bears talking to a nun on rollerskates. Norman Mailer called in once, wanting to show his cartoons. ‘Well, they’re not exactly cartoons,’ he said. And he was right: they weren’t exactly cartoons. They were later published in the aptly titled Modest Gifts…”

Of course it was not always thus. Mankoff, as he explains in his excellent memoir How About Never — Is Never Good For You?, submitted some two thousand cartoons to the New Yorker before he was published. The new generation, he revealed, struggle with the same levels of rejection that he had to deal with. “‘But it’ll make you a better person,’ I tell them. ‘Really?’ ‘Absolutely. Look how much better it made me!'” 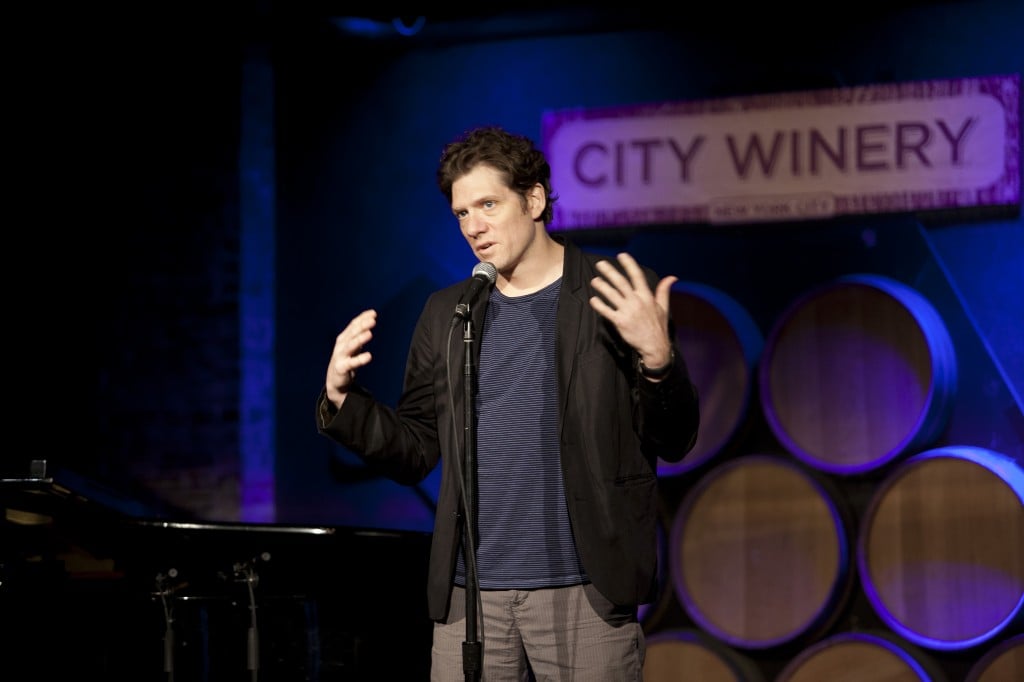 Next it was the turn of playwright-director-novelist-basketball-playing Adam Rapp, who broke out the true story of the inaugural William Saroyan Prize, which he found himself shortlisted for in 2003 for his play Nocturne. “There were only three finalists and one refused to go to the awards ceremony. So I asked my publisher who I was up against. And? Jonathan Safran Foer…”

Still, the prize money was $25,000 — not an insignificant figure — so Rapp bought a suit from a thrift store (“with gargantuanly long arms and legs for my size — I think I was supposed to be six foot nine…”) and flew to Palo Alto for the ceremony. “The drumroll moment happened, and I heard, ‘Adam, congratulations…’, and I thought I’d won! But: ‘…You didn’t win, so sit down.’ I don’t think he meant to be cruel; it was just his first time doing it. And then Jonathan Safran Foer delivered a beautiful speech about the library we were in and how he was going to give the prize money to his local library in New Brunswick…” Unfortunately, the potentially perfect evening took an even darker turn. “On the way home, it started to rain. And I’m drunk on white wine and I’m lost… Eventually I got back to the hotel and I laid down on the bed in my blue suit. I woke up the following morning and it had bled all over the bed. Even my underwear was blue!” 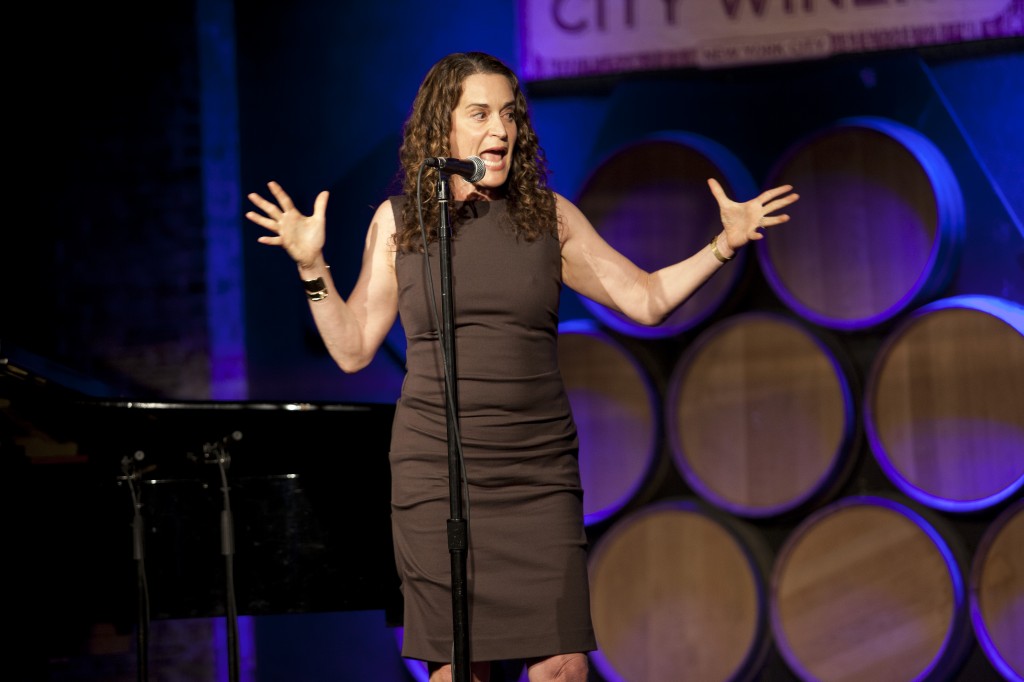 Debora Spar, president of Barnard College, was next up with the story of how an entire generation fell for perfection in the guise of a woman named Charlie. “Gorgeous. Sexy. Young.” In the 1970s, that was the lifestyle the ads for Charlie perfume sold. “In them, Charlie is carrying a briefcase, but not one that makes you worry she’s concerned about the PowerPoint presentation she’s giving this afternoon. In other ads, she has a briefcase in one hand and a baby in the other! But by the end of the ad, she walks into a bar and there’s no briefcase anymore and there’s no baby anymore.”

“Twenty-five years later my Charlie moment didn’t occur in a bar but in the ladies at LaGuardia, wrestling with a breast pump, wracked with guilt over leaving my three-week-old son behind, and trying to close my business suit over my distinctly postpartum bosom.” Wrestling with perfection is the subject of Spar’s excellent book Wonder Women: Sex, Power, and the Quest for Perfection, a book that imagines what she referred to as a new Charlie. “She will look different. Older. She might even have a few wrinkles. Maybe there’s a badly behaving grandchild in the background. She won’t be perfect, this Charlie, but she’ll be real.” 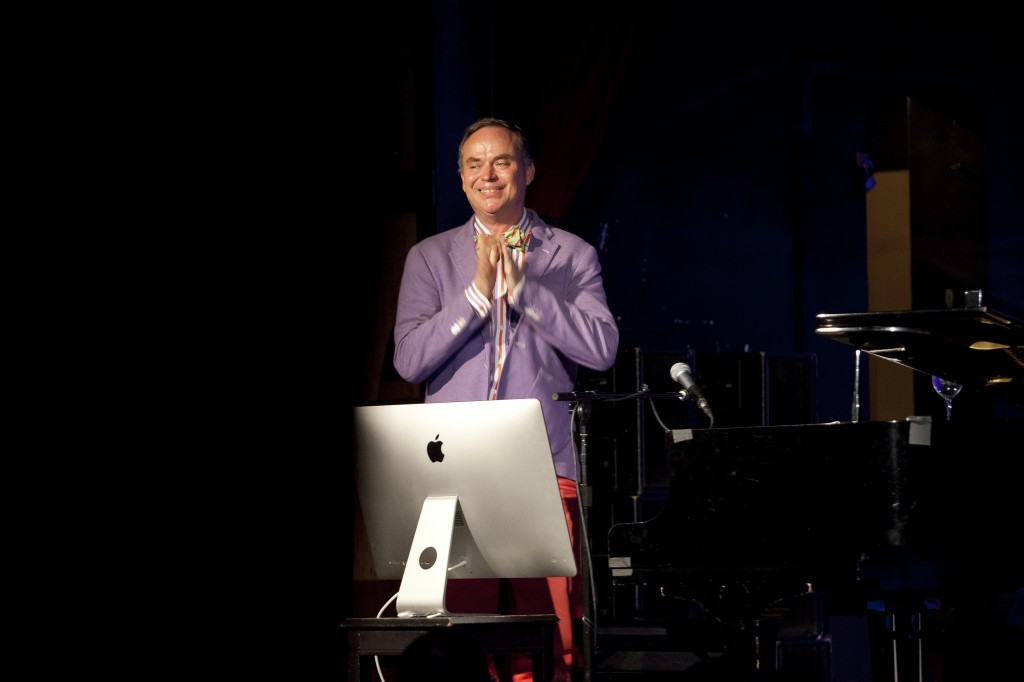 After the intermission, Christopher Mason, the musical star of last month’s show, returned with a follow-up song to “Putin On the Blitz” about the ongoing dispute between Amazon and the publishing industry, in particular the Hachette Book Group. “Brave authors who once seemed immortal / Are now slaves to this online portal,” he began, to the tune of “Anything Goes”. Riffing on numerous popular classics including “Mack the Knife” and “I Wanna Be Like You”, Mason teased out a dystopian future for both writers and the online retailer itself, in which “some daffodils and dildos will be sent to you by drone”.

Emma Straub, who is currently on a book tour promoting her New York Times bestselling novel The Vacationers with her ten-month-old baby, was able to relate directly to Debora Spar’s Charlie moment. “I haven’t used my breast pump at LaGuardia,” she joked, “but I have in the bathroom of the Acela train, which is also pretty gross!” 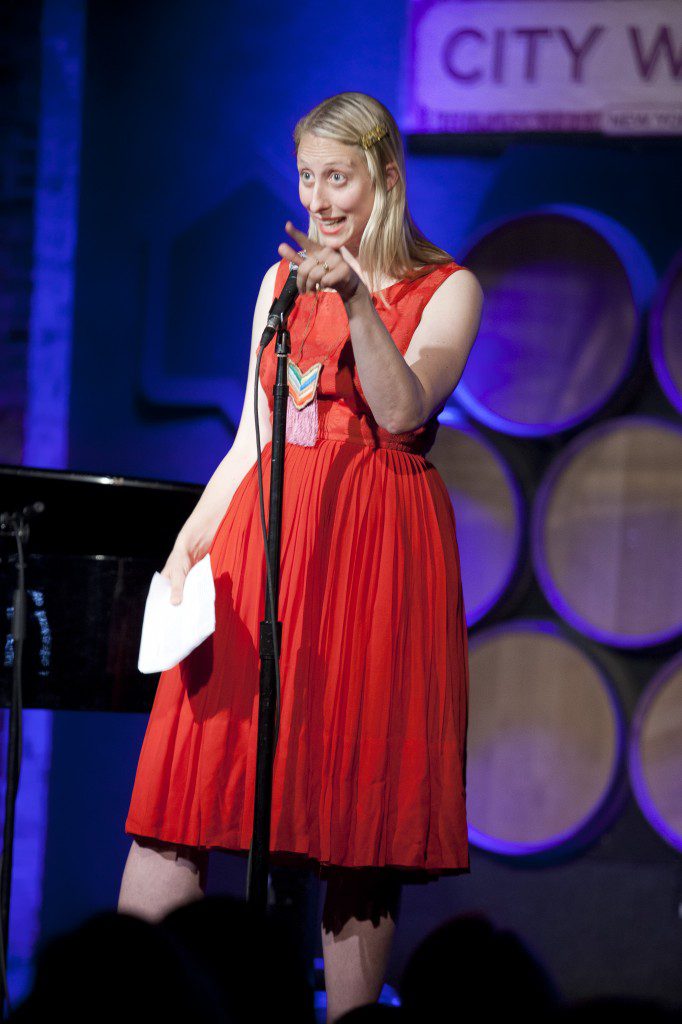 Straub shared her views on fiction-writing and autobiography in relation to The Vacationers. Her avatar in the novel is the college-bound daughter of the protagonists, Sylvia. “I went to college — gasp! — a virgin. And I knew I wanted Sylvia to lose her virginity in the book, so I gave her this beautiful Spanish tutor. I follow tennis and I reeeeaaally like Rafa Nadal. I thought, who would be the perfect person to lose your virginity to? RAFA NADAL. So I did give her a really outstanding first time with Joan. He takes her to a secluded beach, it’s really beautiful… He lifts her up out of the sea and carries her to the beach. It might be slightly over the top, but I thought, ‘You know what? She deserves it! And I gave her an orgasm. There are many perks to being a fiction writer, and I think this is my favourite so far.” 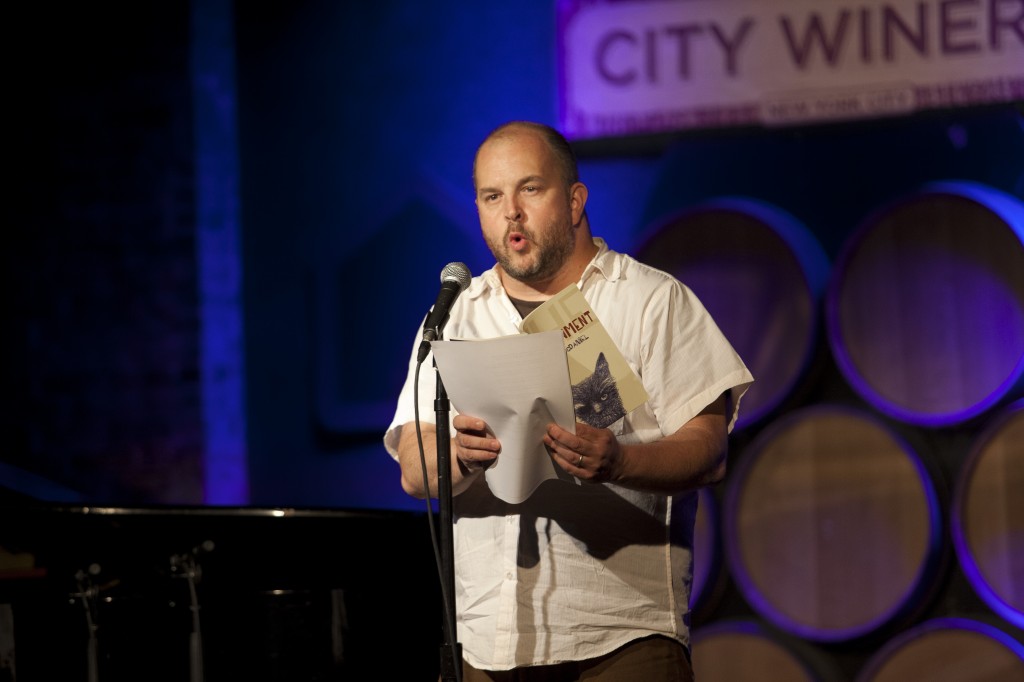 Jeffrey McDaniel, whose most recent collection of poems is the marvellous Chapel of Inadvertent Joy, gave the most moving performance of the evening. The story of his childhood friend Drew took in “summers hanging on the front steps of a friend’s house on 22nd and Lombard”, breaking into construction sites, and “hurling snowballs at people lining up to watch Kramer vs Kramer“. McDaniel talked candidly about his own experiences with drugs and how Drew ultimately succumbed to them. In a poem he wrote after the death of his friend, he described Drew’s body “sprawled like the astronaut who didn’t get to go”.

“Often the things we love and lose have a way of achieving perfection in our minds,” he reflected. “But part of making art — and maybe living — is surrendering the ideal, even only maybe in our waking hours.”

Last on the bill, and the House of SpeakEasy’s final guest for the season, was Elliott Kalan, head writer at The Daily Show with Jon Stewart. Kalan’s subject was “How Movies Warped My View of This City”. A lifelong New Yorker, he remembered growing up with two distinct cities: “there was the New York of grandmas and dinosaur skeletons… and then there was the New York of movies.” He recalled The Muppets Take Manhattan (“maybe the most exciting title a movie could have”), in which Kermit the Frog becomes the victim of a traffic accident and, in an amnesiac state, becomes a businessman named Phil. “To the middle-aged makers of the movie, this was an awful thing to happen. But I wanted to be Phil! I wanted a job with a desk and a phone!” 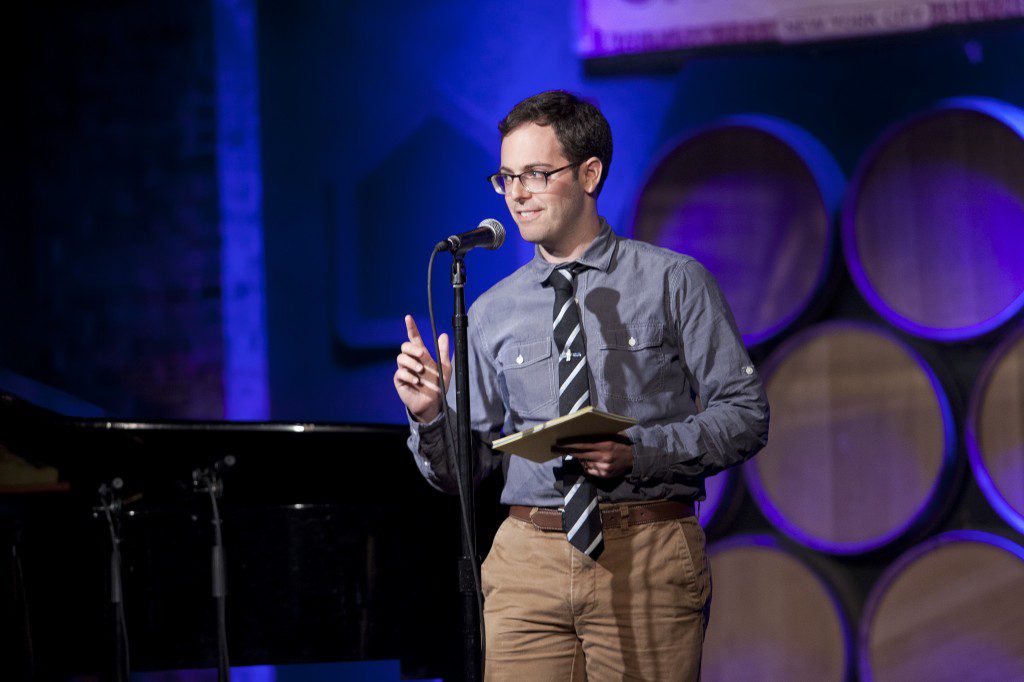 In Gremlins 2: The New Batch, he was similarly taken with the blasé attitude of New York professionals when faced with a flying Gremlin: “I wanted to be so busy that not only was I not impressed by this reptoid goblin, I wasn’t even going to lift my head!” But nothing could prepare him for the excitement of Sigourney Weaver putting away her groceries in Ghostbusters. “The exciting part of that movie was seeing a human living in a high-rise building!”

Of course, life changed. “I grew up. I wore a tie, I had a job, I commuted. And I learned something about the city where grown-ups live: it sucks!” But there’s a sly philosophical upside to all this. “Even if the things I fantasised about didn’t turn out to be perfect, these were the perfect fantasies to have. No matter what the movies tell me, I’m never going to dance with a pig or fight a ghost. But I’ve worn a tie and taken my time putting groceries away. These dreams were achievable. And how many people can say they’ve achieved their childhood dreams?”

Thank you from the House of SpeakEasy to all our guests this season, and to City Winery NYC for being such excellent hosts. We look forward to seeing you back in the fall!