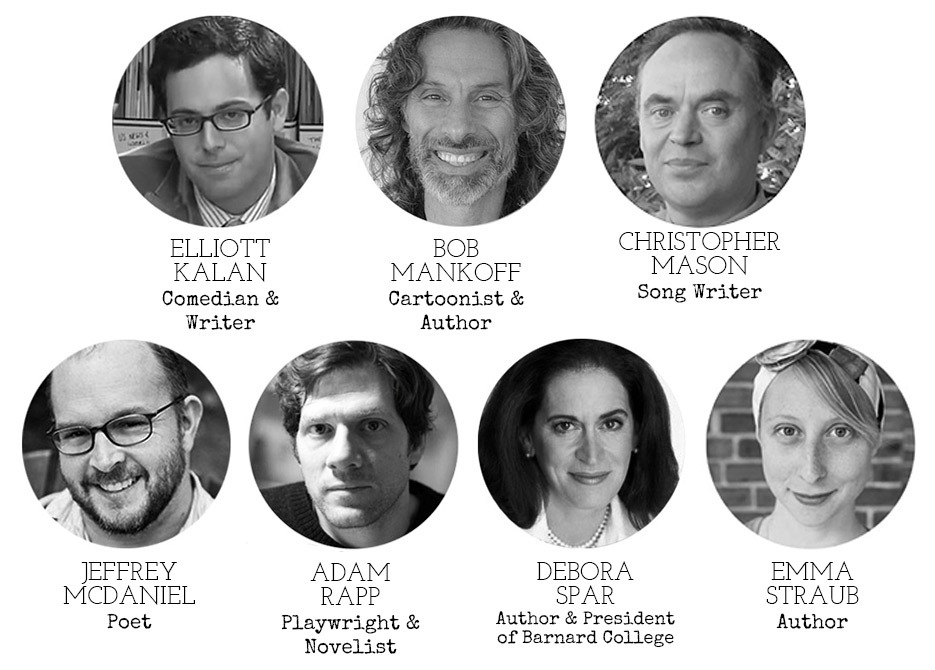 How far we’ve come. The House of SpeakEasy opened its doors on a snowy January night with a guest list including Uma Thurman, Andy Borowitz and Susan Orlean. Since then, we’ve featured some thirty of the best and brightest writers in the literary firmament. Tonight, two days after the summer solstice, and with temperatures firmly lodged in the eighties, we’re delighted to feature a super-cool guest list for our season finale. The Daily Show‘s Elliott Kalan, the New Yorker‘s Bob Mankoff, maestro Christopher Mason, poet Jeffrey McDaniel, polymath playwright and novelist Adam Rapp, Barnard College president and writer Debora Spar, and novelist Emma Straub will all take the mic to tackle the pleasures and pitfalls of Falling For Perfection. We’re delighted to introduce them to you…

Elliott Kalan has been the head writer at The Daily Show with Jon Stewart since he took over from Tim Carvell in January. “Writing for Jon Stewart… is the number-one job in the world,” he says, and it’s easy to see why. In this presentation sponsored by the Eagleton Institute of Politics, Elliott analyses the use of humour in politics:

Bob Mankoff is the cartoon editor at the New Yorker. He recently published an excellent memoir, How About Never — Is Never Good For You?: My Life in Cartoons, which we reviewed here. “My job is to look at one thousand cartoons a week,” he tells the (envious) audience at the TED Talk featured below. In it, he analyses dozens of New Yorker cartoons, distilling a kind of poetics for the perfect specimen.

Christopher Mason was such a hit at May’s Seriously Entertaining that we’ve invited him back! His song “Putin On the Blitz”, a satirical take on the ongoing crisis in Ukraine, was so successful that it was picked up by the Huffington Post. Read our interview with Christopher here and marvel at “Putin On the Blitz” here:

Jeffrey McDaniel is a poet and a teacher at Sarah Lawrence College. His five collections to date are The Endarkenment, The Splinter Factory, The Forgiveness Parade, Alibi School, and his most recent, Chapel of Inadvertent Joy (University of Pittsburgh Press, 2013), which we reviewed here. In this video, as part of the Page Meets Stage series at the Bowery Poetry Club in 2011, McDaniel reads the hilarious “Middle Age”, later collected in Chapel of Inadvertent Joy:

“Our responsibility,” says Adam Rapp, “is to attempt to tell the truth as artfully, intensely, and humanely as possible.” In a remarkably prolific career, Rapp has done just that. His plays include the Pulitzer Prize-nominated Red Light Winter (2006) and The Metal Children (2010), while his fantastic novels include The Year of Endless Sorrows (2006) and The Children and the Wolves (2012). We spoke to Adam earlier this month about the “American Berserk” and young adult fiction — read the full interview here. In this video for Backstage, Rapp dispenses his advice for new writers and directors:

Debora Spar is the current president of Barnard College and the author of Ruling the Waves: From the Compass to the Internet, a History of Business and Politics along the Technological Frontier (2001) and The Baby Business: How Money, Science, and Politics Drive the Commerce of Conception (2006). Last year she published Wonder Women: Sex, Power, and the Quest for Perfection (Farrar, Straus and Giroux, 2013), a thorough report card on the state of feminism in the twenty-first century (reviewed here). In this special TEDxBarnardCollege speech, Spar talks about the dangers inherent in falling for perfection:

Emma Straub is the author of two novels — Laura Lamont’s Life in Pictures and The Vacationers (reviewed here) — and the story collection Other People We Married. In this picture essay, produced by The Morgan Library & Museum, Straub talks about the relationship between her writing… and her cats.

If you don’t have your tickets for tonight’s show yet, get them here!

← Prev: Elliott Kalan Has To Be Funny Every Day Next: Falling For Perfection →