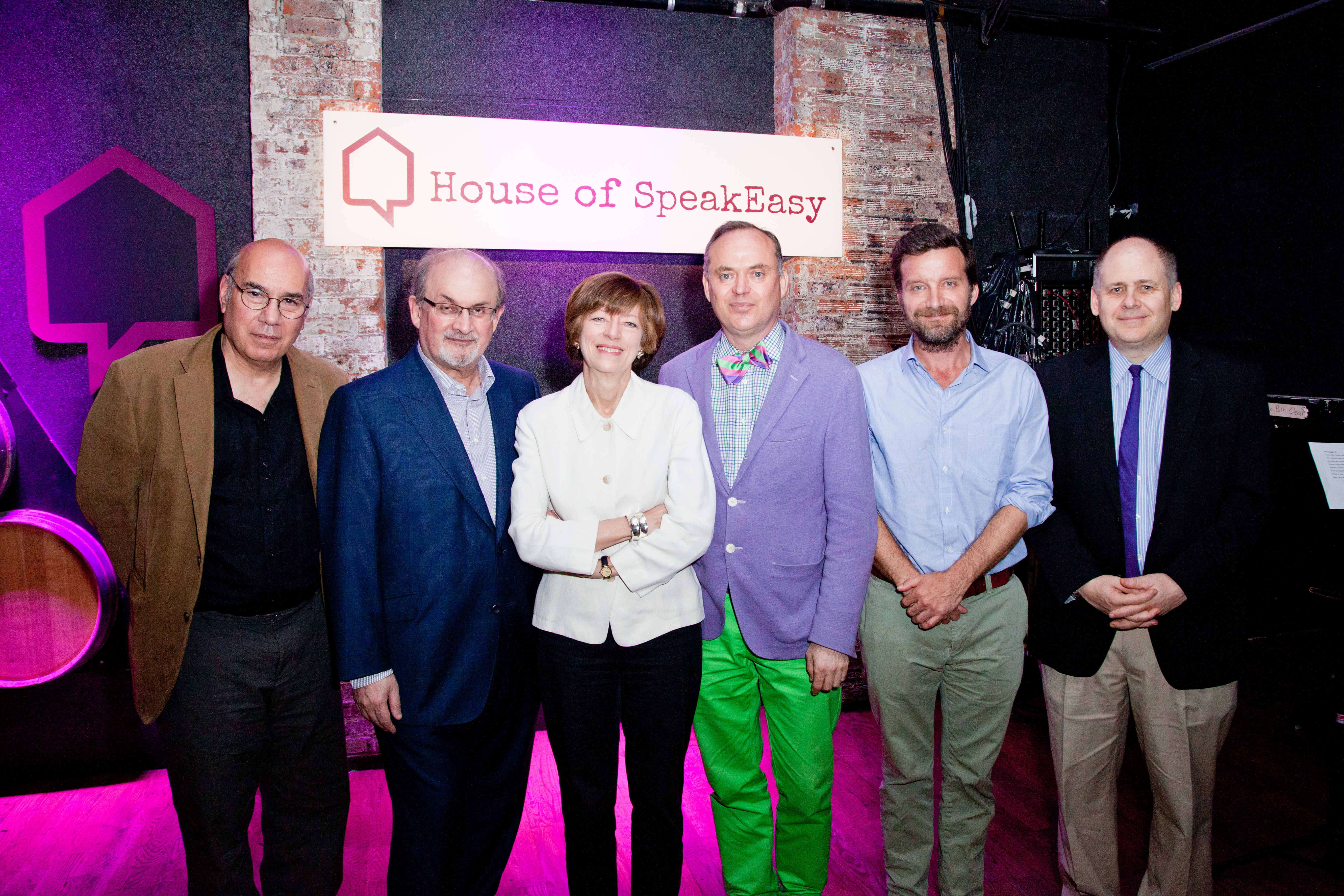 Borgesian understatement, Nixonian analysis, Putinian philosophy, and a rediscovered Kodak disc camera. The ink, the wine, and the laughs were all flowing at Tuesday’s Seriously Entertaining show as another smashing line-up of writing talent mused aloud on the creative process and the terror that one day the ink might just dry up altogether. 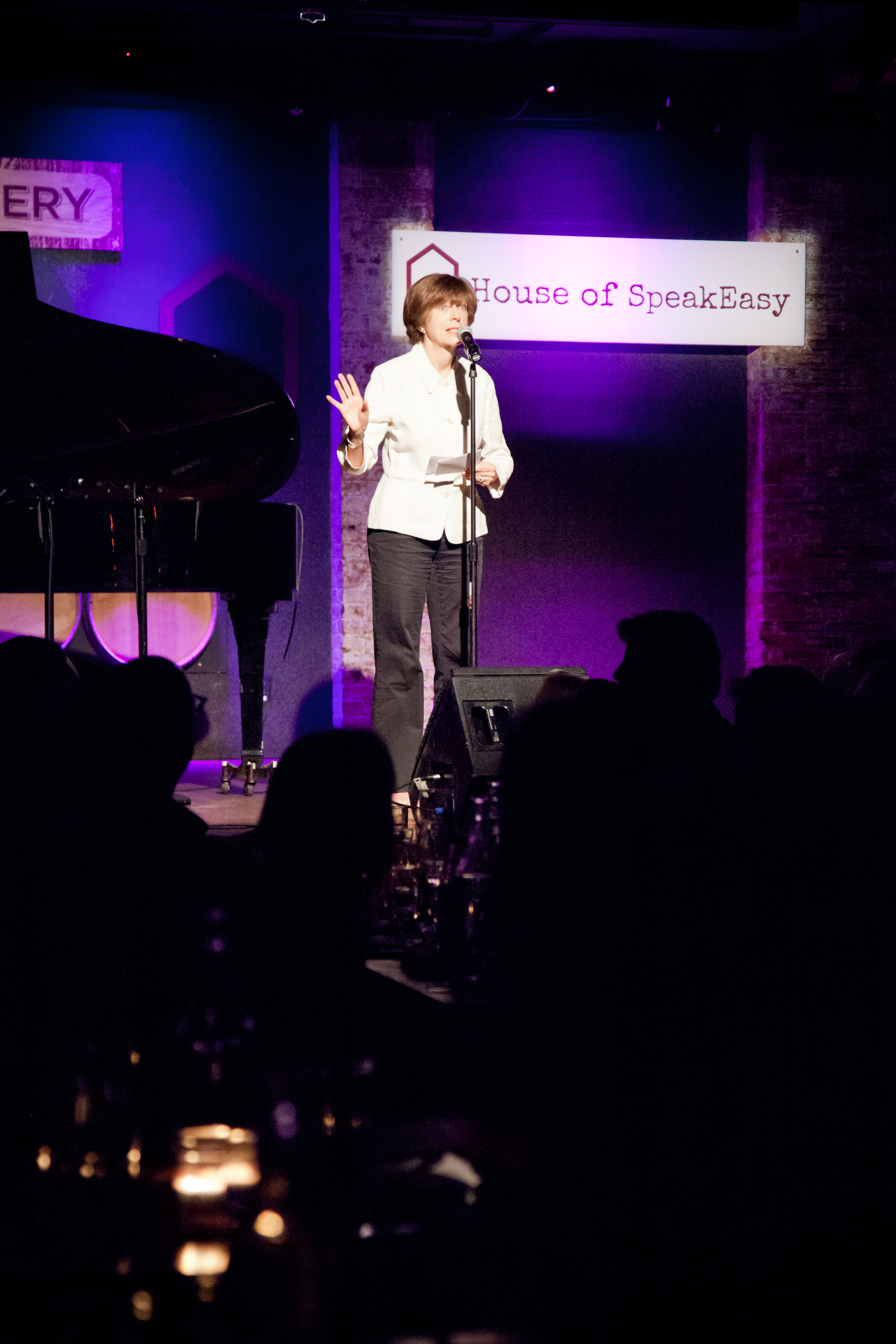 Amanda Vaill was first in the spotlight with a tale from her new book, Hotel Florida: Truth, Love, and Death in the Spanish Civil War (Farrar, Straus and Giroux, 2014). When war broke out, the writers who answered the call to arms were all generally afraid that “their ink was running dry”, not least Ernest Hemingway, one of the stars of Hotel Florida, whose writing career in the mid-1930s was far from soaring. “But those who were the new face, the new day,” said Vaill, “were the photographers, the film-makers.” Most famous amongst them were Robert Capa and Gerda Taro, whose philosophy was summed up by Capa’s maxim, “If your pictures aren’t good enough, you’re not close enough.”

Capa and Taro are perhaps best known for the image of the “Falling Soldier”, which Vaill contends was a staged shoot gone fatally wrong. Whatever the circumstances, it made their name, and when Gerda was tragically killed later in the conflict, tens of thousands followed her coffin through the streets of Paris. Capa survived the Spanish Civil War only to be killed when he stepped on a landmine in 1954 while covering the First Indochina War. Is this how the intrepid war photographer would have chosen to go? wondered Vaill. Or would it have been better to let the ink run dry? 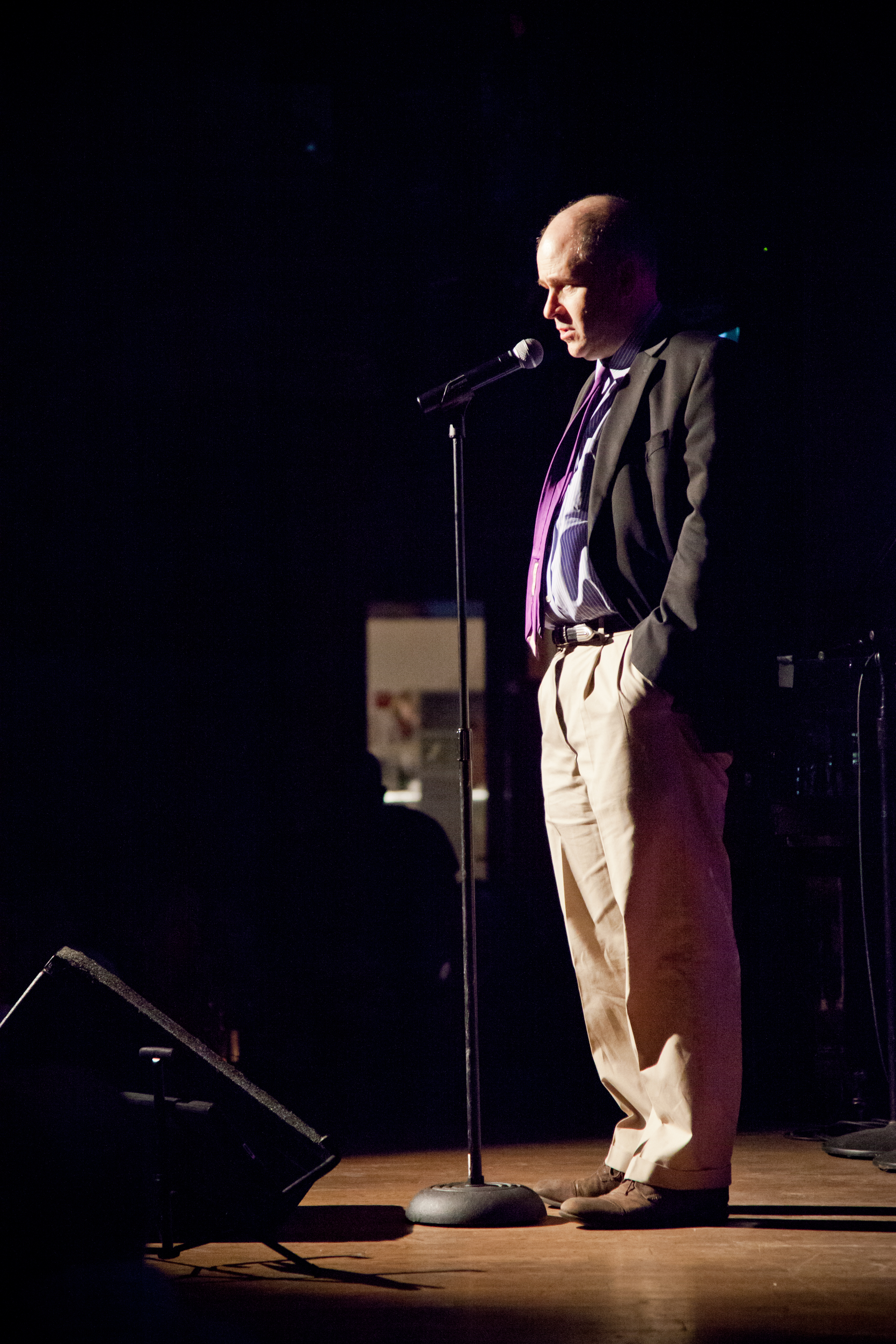 “In 1988, to my mother’s dismay, I launched a project to bring Nixon to Newsweek,” began Jonathan Alter, our second speaker. “Nixon was not a small-talk man,” he recalled; “he was a man who wore his black oxfords on the beach.” Still, what he lacked in social graces he more than made up for in the astuteness of his observations. When asked how he thought history would judge him, Thirty-Seven responded, “You have to distinguish between history and historians, because history is written by liberals.”

Nixon was a notorious user of tape recorders, a habit that contributed hugely to his downfall. But despite their destructive potential, the humble recording device has flourished in the White House ever since. After a tense conversation in 1999 with Bill Clinton during which Alter asked him if he would be seeking psychiatric help — this was following the infidelity-impeachment double-header — the writer discovered that his interview tape was totally blank. “So I called the White House and asked if the presidential limo has a recording device… fortunately it did…”

And a recording device played a key role in the 2012 election, too, as Alter reveals at length in The Center Holds: Obama and His Enemies (Simon & Schuster, 2013). He closed his great set with the story of Scott Prouty, the waiter whose secret recording of Mitt Romney’s “forty-seven percent” comment may well have been one of the most significant factors in Obama’s re-election. 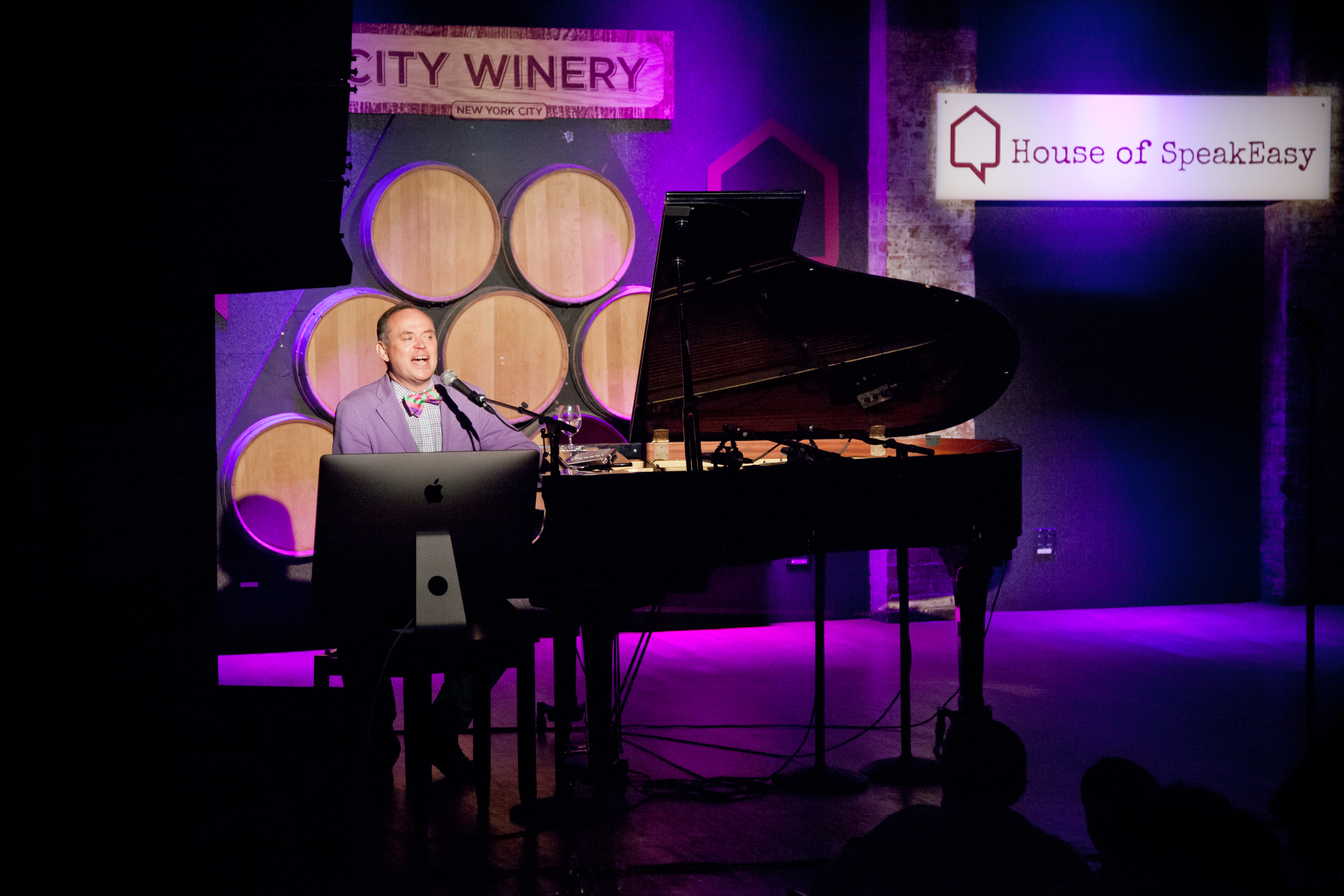 Booker Prize-winning author Salman Rushdie, who won the inaugural Tip of My Tongue competition at the House of SpeakEasy gala in January, returned as host of this month’s quiz, delighting the crowd with three mystery literary passages.

After the interval, satirical songwriter Christopher Mason launched into a new and brilliantly witty take on the crisis in Ukraine entitled “Putin On The Blitz”. “You say Ukraine / I say Mykraine,” says the Russian premier in Mason’s hurlyburly retelling of the currentest of affairs. “Haunting former Soviet republics”, the bare-chested leader goes “advancing in Ukraine” to the tune of “Singin’ in the Rain”. Watch this space for a video of Christopher’s performance, coming soon.

“I really have to follow the fucking piano player?” asked David Gilbert, author of & Sons (Random House, 2013) and the next writer to take the stage. “I was nearly in a taxi!” 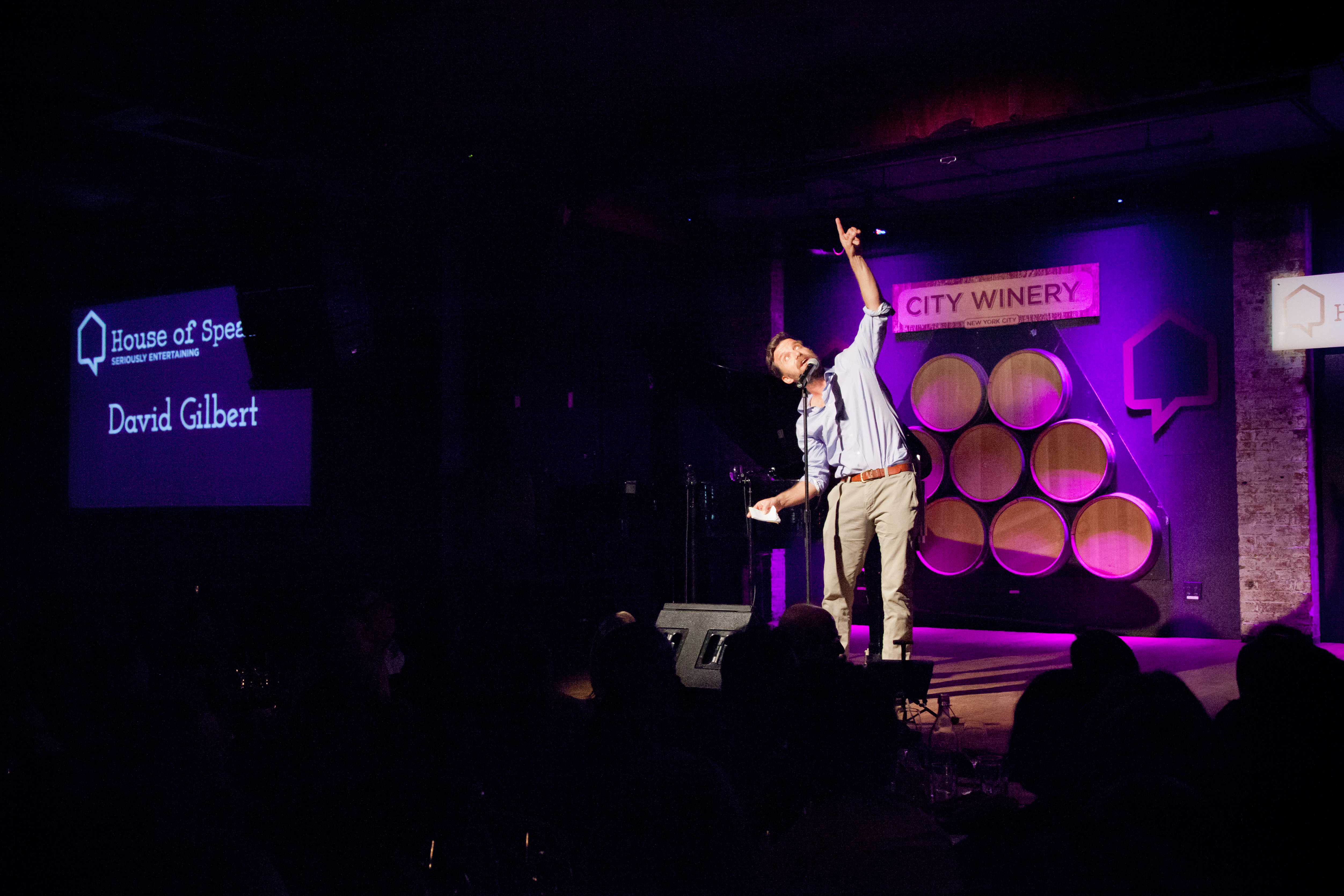 Fortunately for us, Gilbert stuck around, unspooling a brilliant story of writerly procrastination and recovered photographs. Writing’s hard at the best of times, but Gilbert would make it even harder for himself by attempting to contrive lines of prose that were exactly the same length. “This was before I discovered ‘Justify All’… But then I noticed the gaps between words, which annoyed me even more than the right-hand margins!”

One day while cleaning out his closet (to avoid writing, naturellement) he came across a roll of undeveloped film from one of the Kodak disc cameras from the early 1980s. “You just know these prints are gonna be terrible,” he said, but set out merrily nonetheless to find out what they contained — “maybe all those fun times, the secret adventures of your teenage years?”

Instead he finds a succession of selfies. “Me looking in a mirror. Me looking to the right. Me looking to the left… Then the first two buttons of my shirt are undone. Then my shirt is off. Then my pants are off… Here I am looking at my selfie self, and I can see this poor kid trying to figure things out.” He grinned. “Then the last picture is of my dog.” 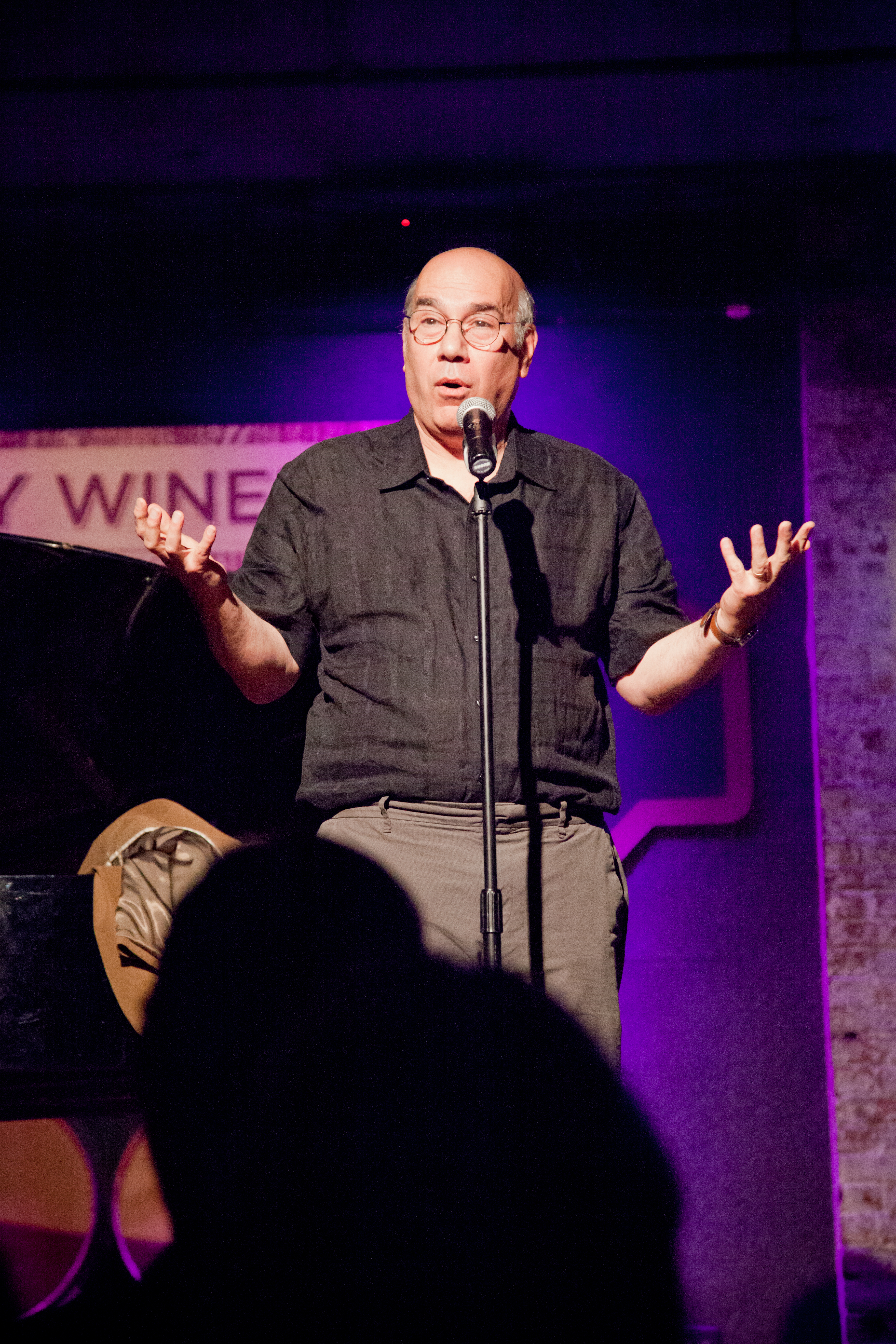 Our final guest of the night was poet, biographer and critic Jay Parini. “In 1968 or so, I was being chased by this fucking government that wanted me to go to Vietnam. So I went to Scotland for seven years and enrolled at St. Andrews.”

There, Parini was given the task of chaperoning the visiting Jorge Luis Borges, a name unknown to him at that time. Unimpressed by this supposedly famous writer, Parini asked Borges why he’d never (even) written a novel. It turned out that Borges had in fact considered doing so for many years — a giant blockbuster epic of a novel, no less. Rather than that, though: “One day I went to my desk and wrote a two hundred-word review of this novel instead,” said Borges. That would do.

Parini later became friends with Gore Vidal, whose biography he is currently writing. When he first met Vidal’s partner, Howard Austen, Howard was introduced as secretary to the great man. “Howard, what does that entail?” asked Parini. “Put it this way, big boy,” responded Austen: “I don’t type.”

Parini closed the evening with some fine words of advice. When working on a novel about Walter Benjamin, he asked Vidal if he could really have two characters discussing Heidegger’s philosophy for thirty pages. Gore’s response was quick and invaluable: “Only if they’re sitting in a railway car and the reader knows there’s a bomb under their seat!”

Watch out for videos from The Ink Runs Dry, coming soon to the House of SpeakEasy website and our Twitter feed.

← Prev: Curtain Call: The Ink Runs Dry Next: Can The News Make Us Better? →